Sunnyside resident Virginia Bethune and Sunnyside hosted a group of four harpists from across the U.S. for a three-day virtual practicum.  The weekend events were part of their final requirements for certification as therapeutic music practitioners through the nationally acclaimed Music for Healing and Transition Program (MHTP).  Therapeutic music is used to produce purposeful outcomes such as relaxation or to lower pain, decrease blood pressure, promote healing, decrease anxiety and promote positive experiences.

Virginia, a Certified Music Practitioner (CMP), led the certification workshop, which she has done at Sunnyside for the past 10 years.  Using a virtual format, the MHTP students played harps, a large lyre, and a guitar for ten residents in Health Care. Each musician played an instrument for residents with differing medical conditions.  The students also interviewed Charlotte Sibold, Sunnyside’s Executive Director, as well as Health Care Administrator Sue Ellen Clark.

During the practicum, Virginia shared photos of three sisters – two former students and a graduate of one of her CMP workshops – who began their studies using harps made by Virginia’s husband Dick, who recently played at the White House.  In addition to assisting students with practicums, Virginia has played as a CMP at both Sentara RMH and the University of Virginia Hospital.

What’s next for Virginia and her CMPs?  Johns Hopkins University School of Medicine and the Peabody Conservatory in Baltimore have developed a model program called the Johns Hopkins Center for Music and Medicine.  This may present future opportunities in Charlottesville and Harrisonburg for Virginia and the 15 CMP graduates from her programs.

This article is a summary of a resident article in the Sunnyside Times, Sunnyside’s resident newsletter. 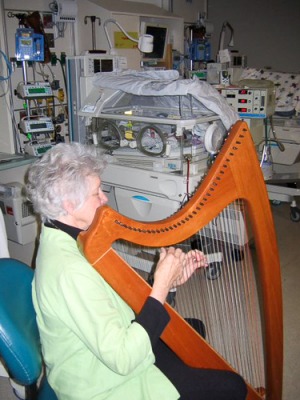